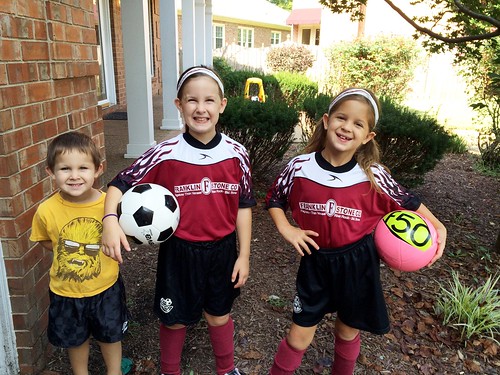 Another season of fall soccer is under our belts and this was a good one. We tried a few new things this year - some that were good and some that were amazing growing experiences for our girls.

For the first time, our little girls (who are only 15 months apart in age) played on the same team. We were able to age B (who turned 7 in May) up to play on the same team as N2 (who will be 9 in January). There were a couple reasons that we decided to do this. One, as any parent with multiple kids playing multiple sports on multiple teams knows, there are a lot of games and practices to juggle. Now we were down to one team to keep up with - so much better. Two, B is a good soccer player. Really good. She did great with the team for her age group, but could definitely stand to be challenged a bit more and we though would do well with a more aggressive coach (which N2's coach was). 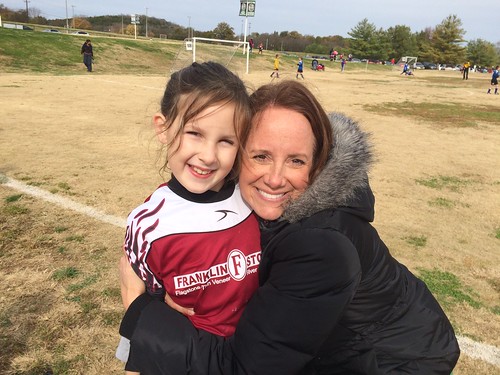 It went great for the first few practices until B had to get out onto the field for the first time. All of a sudden she was out there with girls that were quite a bit bigger than her and it was very intimidating for her. She was overwhelmed. For at least the first three games (maybe 4?) she wouldn't go in at all. She would be fine up until she was standing on the side line and then as she waited for the whistle to blow so she could sub in, she would just crumble. It was heartbreaking to watch. This was the kid that smiled constantly when she played soccer in previous years and to not see her out there enjoying what she loved was hard. 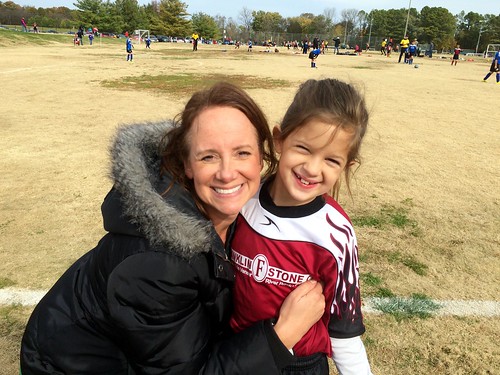 Her coach was so patient with her. She worked her hard in practice, and soon figured out where B's strength were now that she was playing with the bigger girls / older team. When B played with her own age group, she was a great offensive played and usually one of the top scorers on the team. However, running with the ball all the way down the field (which doubled in size for her this year) and with girls a lot bigger charging at her, was a bit more than she could process. 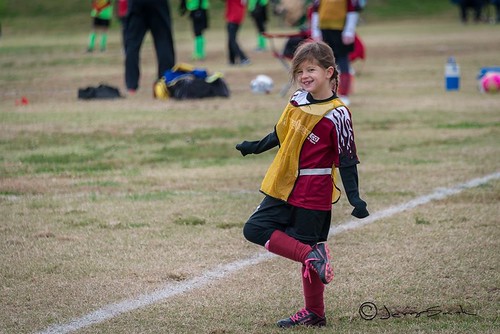 It finally just came down to getting her over the hurdle of getting in the game. She was psyching herself out of playing and working herself up when she would sit on the sidelines. It came down to a bribe - a trip to the dollar store if she could get in the game and stay in for ten minutes. I guess that was enough incentive. Her coach put her in at half-time and she ended up playing the entire half without ever stopping. Her grin was back on her face and she didn't let any balls get past her, even with those big 9 year olds running full steam towards her. Her confidence was back and she remembered that she really did know how to play. She finished the final half of her season strong and owning defense for her team. Nothing gets past her! 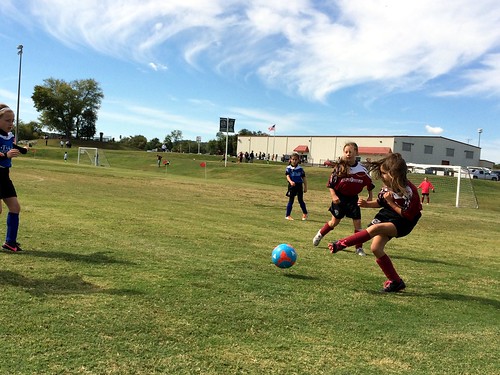 It's been such a blessing to watch her overcome this hurdle and fear and realize the she can do hard things. She is my one that has her own struggles in learning in school, but sports has been her thing to shine in. To have that be a struggle for her this fall has been hard to watch, but to see her succeed has been that much more sweet.

PS. And not to leave out the other girl ... N2 had a great, GREAT season as well. She is so consistent out there on the field. She runs and runs and plays steady and constant. She even scored the final goal for her team's season in their last game yesterday which was a super fun way to end her season. So proud of her as well for how she put 110% into this fall season.
Email Post
Labels: B N2 soccer