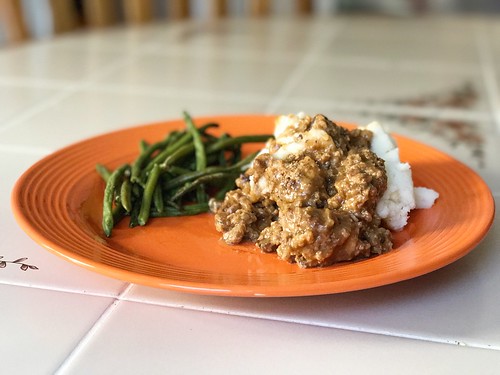 Our CC group was on break this week, and it worked out perfectly for us. I seem to do better (as do my kids) on a six/seven weeks on, one week off schedule. Sometimes this lines up with our homeschool tutorial, sometimes not. But I was ready for a week to recharge. Usually these weeks involve lots of cleaning out of closets and tasks around the house, but I didn't do as much this week. All of our regular activities were still on the calendar (music lessons, Awana at church, gymnastics, etc.) so our days were still humming. However, unknowingly, I managed to give myself a bit of a break by putting four brand new crockpot recipes on my menu plan. I know! Totally risky. Crockpots are funny things - the right recipe is gold, but there are plenty of bad ones out there.

In the spirit of mom solidarity, I thought I would share the four that I made with our comments. All of these recipes came from Six Sisters Stuff. I've been following them on Instagram for a while now, and when I see them post a recipe I like, I use Instagram's new little save feature (the flag that is underneath a photo on the right). Then when I'm menu planning, I pull up my saves and go through and see if anything new jumps out at me to try.

Slow Cooker Steak Fajitas - this recipe is actually one that the Six Sisters made from the 100 Days of Real Food Cookbook. We had some taco meat left over from the weekend from something at our house, and I found one smallish steak in the freezer. I knew my kids would not be fans of the onions and peppers cooked with the steak, but the grownups were. One smallish steak plus a load of veggies was perfect for me and my husband to have for dinner ... and the kids got taco leftovers. I'll make this again.

Slow Cooker Lasagna - this was another good one. I made this on Valentine's Day. (Nothing says Valentine's like something Italian). It was tasty and just the right size for our crew. FYI - on all these recipes I used my 4 quart crockpot, instead of my bigger 6 quart. If I make a recipe to fill my larger 6 quart size, I generally end up with more leftovers that I want to eat! The 4 quart has been working out perfectly for us, but I know that won't last long. As different children enter different growth spurts we run out of food some nights!

Crockpot Creamy Ranch Pork Chops & Potatoes - this one got RAVE reviews from my kids. I honestly don't know the last time they have gushed about a dinner like this. The six year old boy kept asking for more "chicken" (we corrected him several times that it was pork, but it didn't stick) and said that this meat was "'ah-licious!" multiple times. (I will be so sad when he stops saying delicious that way). My 11 year said that if it wasn't considered rude, she would lick the sauce from this dish off her plate. High praise indeed for this one!

Crockpot Swedish Meatballs - another major hit with my kids (and me!) This is the only recipe I took a picture of and, other than the fact that my meatballs fell apart in the crockpot after cooking all day, it was such a good comfort food dish. I did what Six Sisters suggested, and served it over mashed potatoes and that was pretty fabulous, and I'm not a mashed potatoes person. I think the meatball problem was that they were turkey meatballs made from a Pioneer Woman recipe and in my experience, I have not yet learned the trick to getting my meatballs to stay together well. It didn't affect the taste in the least!

All these recipes are going in my keeper pile and into rotation. I have my favorite recipes and cookbooks that I fall back on time and time again, but it's always nice to find a new recipe / blogger / Instagram account to add into the rotation for some new inspiration!
Email Post
Labels: crockpot Food Homemaking winter