Yesterday, for the first time, I counted up last night the number of days that I have been “home” - using that loosely as I have been out of house as the designated Walmart / Sam’s shopper for our crew. The count begins from the first day both girls were officially out of school for CoVid-19 and never returned. The total: 37 days. Thirty-seven days since I’ve been with friends, since my kids have seen friends, been to school/homeschool classes, or worshipped in our church building. That’s a lot of days! There are probably many that have been home-bound for longer, and the number isn’t letting up for another few weeks at any rate. And, to be honest, will I really rush out the moment that the stay-at-home is lifted? 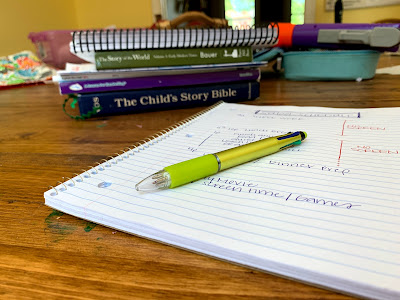 Over all, the staying at home part hasn’t bothered me at all. I’m a homebody and quite introverted so having my calendar suddenly become clear hasn’t been a huge burden. I’ve missed watching my kids play their spring sports, and I will miss seeing my eighth grader participate in mock trial in a real courtroom - mock trial on zoom just isn’t quite the same. But even with my love of home, it took about three weeks before I really started getting down. Days were blurring and it was hard to be motivated to continue homeschooling my crew and keeping up with stuff. I decided I needed a little motivation to see if I could get myself back into a better frame of mind because that’s really where the problem was centering. My mind was set in unproductive and unprofitable ways and it was dragging me down.

Fun fact - in general, I am not motivated by a daily checklist. Seeing a list of things I have to check off makes me absolutely not want to do them. Which is weird because I’m such a list maker and love making a list of things that I need to get to, but that I work in when needed or it fits ... but a week of boxes marked with things I need to do daily? Such a turn off. I am nothing if not contradictory! I am motivated by routine - creating a flow to my day where things naturally fit in because it’s just what I do then, so I do it. I think it was Gretchen Rubin who talks about this in one of her habit books - that the best way to make a new habit is to combine it with a habit that you are already doing and after so many days of attaching it to something it just becomes part of that routine as well. You would no sooner forget to do B than you would A now, if that makes sense. And then, it made sense as to maybe one of the reasons I was feeling super out of whack and depressed - I was missing my routine. I was no longer getting up to take kids to school daily; when I did that, I made a point to be up before then so I could have some quiet time before the drop off run. I was still sort-of getting up before Ethan at least, but not long enough for a enough time to settle my mind for the day, for sure. And let’s not talk about bedtimes! With not needing to get up for school, we were being fairly lax with winding down at night and that doesn’t work well (for me) either. It makes me laugh a little that it took me so long to figure out what was out of sync!

A couple weeks ago, I started setting my alarm again. Not crazy 5am times like when we had school, but 6:30ish. I enjoyed the sun being up when I got up! I had time to open my Bible and prayer notebook - even if it was 20-30 minutes it was helping me so much. I picked a book of the Bible to work my way through so I had a place to return to (taking that decision fatigue out of the way as well). I also added 3 other things to my day that I wanted to try and fit in as part of my routine - not a checklist to make it mechanical, but remembering to take time to do things that bring me joy v. checking the news and scrolling Facebook, ie., things that do NOT bring me joy! I resolved to try and take a photo, read a little, and create a little something every day. All things that in real-non-CoVid life I did, but that I had stopped making time for because sitting and fretting took up my time instead. Pretty lame. And “create” has a very b r o a d meaning - it might mean that I print one of those photos I took and stick it in my scrapbook. It might mean I crochet for a bit while I watch something with one of the kids. I even might count dinner as being creative if it was a new recipe! This doesn’t mean I don’t still get anxious (unfortunately). Or that I don’t hyperventilate when I tie my bandana on before running into Walmart because I feel claustrophobic. But it’s making me think twice about checking the news, or seeing if I’m missed non-existent texts, or checking my email for thirtieth time in 20 minutes, that kind of thing. One day my days will be very full with driving and going and all the doing, but hopefully these markers for my days will be so ingrained they will stick around. 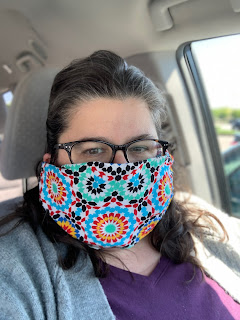