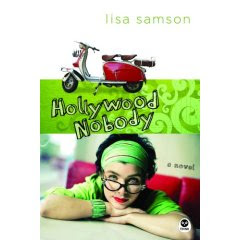 The hypocrisy of Hollywood never seems to affect the contradictory allure of Hollywood. Millions of Americans are addicted to the Hollywood gossip columns, blogs and tabloids that feed us a steady diet of rumors and half-truths. Noted young adult fiction author Lisa Samson tackles the shallow fluff of Hollywood and digs deeper to find out what’s true and what’s not amidst the glamour and glitz in Hollywood Nobody.

About the Story
Fifteen-year-old Scotty Fitzgerald has spent her young life on the road, traveling to movie sets with her single mom, Charley, a food designer. It’s hard enough to live on the road with Charley, the hippie mother who’s more of a kid than you are and seems to constantly be on the run. But Scotty, lonely and longing for her father, gathers together a different sort of family made up of crazy directors, and geriatric RVers.

On the set of a Great Gatsby remake in North Carolina’s Toledo Island, Scotty befriends rising star Seth Haas (aka “Seth Hottie") and failed fashion designer Joy Overstreet. She tries to avoid prima donna Karissa Bonano, who seems to represent all the hypocrisies Scotty rants about in her anonymous “Hollywood Nobody” blog. She begins to kick against Charley’s protective restraints and weigh what it might cost her to create the life she wants for herself and to gain the answers to her most important questions. But the answers turn out to be darker than she could have imagined ad threaten to sink her trust in the people dearest to her.

Who is Scottie’s father? Why is her mom so secretive? And who is this mysterious man that keeps following them? How can life possibly be so lonely in the company of so many people? 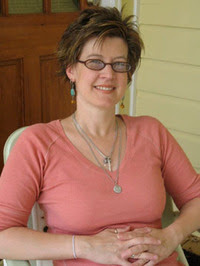 Lisa Samson is the author of twenty books, including the Christy Award–winning Songbird. She speaks at various writers’ conferences throughout the year. Lisa and her husband, Will, reside in Kentucky with their three children.

Q&A with Lisa Samson, author of Hollywood Nobody

Q. What inspired you to write Hollywood Nobody?
A. NavPress approached me at a publishing conference about writing YA fiction. They felt my writing voice would transition naturally into YA. Well, that day, I was sitting in my car in Opryland's parking lot, and the idea just gushed out. Nav loved it, and here we all are, me, Nav, Scotty Dawn and her fabulous readers.

Q. What message would you like readers to take away after reading Hollywood Nobody?
A. Be yourself and don't think the grass is always greener "over there." Chances are, somebody's looking at your yard thinking you've got it made.

Q. What does faith mean to you?
A. Faith means trusting God even when you have no idea what's going on around you, or what lies ahead. Faith means that somehow, somewhere, the bad stuff will be turned into good, even if that seems impossible.

Q. Can you describe what a "normal" family means to you? Did you grow up in a "normal" family?
A. Honestly, I don't think there is such thing as a "normal" family. We're all odd in our own way. Sure, some families look normal from the outside, but we're all weird in our "own special way." Of course, some families' abnormalities are dark and painful, and I just hope and pray that Hollywood Nobody will provide young women in those situations with a little bit of escape and encouragement.

Q. How did that help you?
A. I was always encouraged in the arts. My Dad played boogie-woogie for pocket money in college, and painted when he came home from his practice at night. My Mom worked at our church, was involved in other causes, so I became aware of my social responsibilities through her.

Q. In Hollywood Nobody, Scottie really struggles to find authentic relationships due to her nomadic lifestyle and the pervasive Hollywood influence in her life. What do you think Scotty would say to Britney Spears or Lindsey Lohan if she had the chance?
A. She'd say, "Are you kidding me?!" :-)

Q. What book is coming up next? Will Scottie find out who is chasing her?
A. The next book is called Finding Hollywood Nobody and yes, she will figure out who Biker Guy really is!

Q. What book(s) are you reading now?
A. Right now I'm reading, Growing Up Hard in Harlan County and Jesus of Nazareth.

Q. If your book were turned into a movie, who would play the main character(s)?
A. Amanda Bynes with a dark, curly wig. Adam Brody would nail Seth Haas. Charley could totally be played by Kelly Preston.

Q. Which one of your characters is most like you? Why?
A. Well, Scotty thinks a lot like I do. But I don't think any of the characters in this book resemble me. I am 43 dontchaknow. :-) Scotty, however, is an awful lot like my 17-year-old daughter Ty. I really felt like she was whispering in my ear as I wrote the book.

Q. What do you want your readers to know about you?
A. I guess I hope they know I remember how awful being a teenager could be! I'm not the person who says, "This is the greatest time of your life. Just be happy." I wouldn't go back to High School if anybody paid me to do it. It's a hard gig.

Q. There are many references woven throughout Hollywood Nobody to F. Scott Fitzgerald's The Great Gatsby. Is this a favorite book for you? Why did you choose it as a backdrop for Scotty?
A. Yes, The Great Gatsby is a favorite of mine. I chose it because I was re-reading it when I started writing the book. There are a lot of parallels between the two storylines. Unrequited love, the outsider looking in, wanting what we can't have. Beyond that, I wanted Scotty to be the literary type and to encourage the readers of Hollywood Nobody to venture out into something more classic than my book!

Q. Are you a vegetarian like Scotty or her mother?
A. I've tried it a time or two. And I wish I could stick with it. But usually it's fried chicken that knocks me off course every time. (I love fried chicken!)

Q. Scottie struggles with defining faith and how it fits into her life. Can you describe your experience coming to faith?
A. I've been in church all of my life! When I was three I remember asking Him into my heart. But faith isn't just a nice little formula, it's embracing Christ and God's faithfulness, day after day after day. Honestly, each day I hope I come to Christ a little more, hoping to draw closer to Him, to be more like Him, to love Him more.
Email Post
Labels: Books Review