Book Talk: The Horse and His Boy by C.S. Lewis 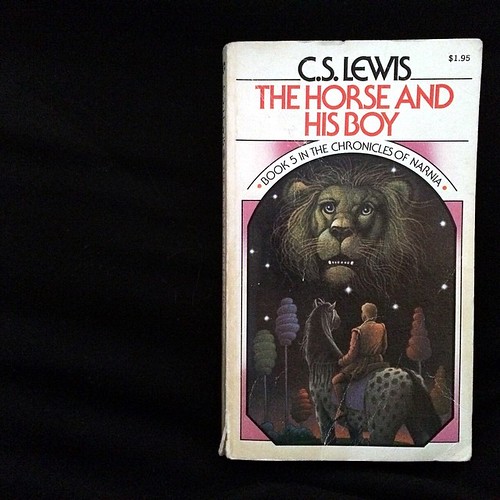 I few weeks back I posted a photo of our current read-aloud on Instagram and commented that The Horse and His Boy was one of my favorites from the Narnia series. (Really, they are all my favorites, but I do love this book a lot). I was kinda surprised at the comments I got that said they didn't really care for this one. I thought I would share just a few quotes to show why I love this story so much.

The tale is of Shasta, an orphan boy trying to make his way to Narnia with his talking horse Bree. Along they way, they pick up traveling companions: Aravis (a runaway princess) and her talking horse, Hwin. They run in to one scrape after another and Shasta eventually, and quite naturally, gets to a point of being quite discouraged. Don't we all get like this as we are in the midst of seasons of life where we are struggling, or tired, or worn, or at the end of our own strength?


"I do think," said Shasta, "that I must be the most unfortunate boy that ever lived in the whole world. Everything goes right for everyone except me. Those Narnia lords and ladies got safe away from Tashbaan: I was left behind. Aravis and Bree and Hwin are all as snug as anything with that old Hermit: of course I was the one who was sent on. King Lune and his people must have got safely into the castle and shut the gates long before Rabadash arrived, but I get left out."

And being very tired and having nothing inside him, he felt so sorry for himself that the tears rolled down his cheeks.

However, he shortly finds that he is not alone. As he is traveling in the dark, along a path that he is unsure about, he hears a Voice.


"I do not call you unfortunate," said the Large Voice.

"I was the lion." And as Shasta gaped with open mouth and said nothing, the Voice continued. "I was the lion who forced you to join with Aravis. I was the cat who comforted you among the houses of the dead. I was the lion who drove the jackals from you while you slept. I was the lion who gave the Horses the new strength of fear for the last mile so that you should reach King Lune in time. And I was the lion you do not remember who pushed the boat in which you lay, a child near death, so that i came to shore where a man sat, wakeful at midnight, to receive you."

Isn't it a comfort to know that even when we are unsure, scared, at our end, there is someone traveling along side us the whole time? Shielding us with his presence, guiding our steps even though we don't recognize it? Reminds me of the Israelites when the Lord spoke to them through Moses: "I Am that I Am." Exodus 3:14

"Myself," said the Voice, very deep and low so that the earth shook: and again "Myself," loud and clear and gay: and then the third time "Myself," whispered so softly you could hardly hear it, and yet it seemed to come from all round you as if the leaves rustled with it.

And then the realization that he was being cared for all along.


"I see," said Shasta to himself. "Those are the big mountains between Archenland and Narnia. I was on the other side of them yesterday. I must have come through the pass in the night. What luck that I hit it! - at least it wasn't luck at all really, it was Him. And now I'm in Narnia.

And then, at long last, Shasta is home.

A wonderful reminder to me, through the gift of fiction, that I am constantly on a journey home. This is not my final stopping point, and there will be difficulties and pitfalls along the way. But the great I Am, God Almighty, walks right alongside me, illustrated so beautifully here in the picture of Aslan walking alongside Shasta. And that, right there, is why I love this book so much.

This is part of our Summer of the Sequel reading plan. I'll eventually be linking this book up with Amy's Read Aloud Thursday wrap-up at the end of the month, and Carrie's July Narnia read-along.
at June 19, 2014