It's supposed to hit 63* today!! I may have broken out a skirt to wear even though I'll probably be chilly when I go outside. The sun makes me do crazy things!

For sunshine. For antibiotics for pinkeye (still trying to get rid of it in some of us). For a couple days of winter break. For girls happily crafting. 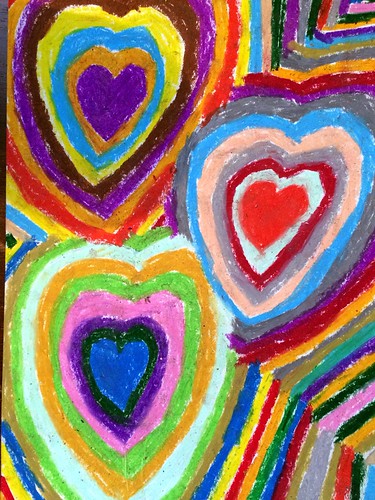 I am thinking about...

The faintest glimmers of thought are poking around in my head about next year's school plans. I'm doing my best to stuff the back for a few more weeks! I don't want to wish away the rest of this year too quickly.

We are down to our last six weeks in CC so it's time for those of my girls that want to test for memory master or memory cadet to get to work polishing up what they do know and working ahead on what they don't. B and I have added a few lapbook elements into her first grade work and I'm having moments of regret that I didn't start that sooner this year with her. One of those things that got forgotten in my planning. We had a great time working and reading Another Celebrated Dancing Bear. We even made time for tea one afternoon and had brown bread and jam just like the bears in the story. Truthfully, and just as I expected, my girls were not fans of the strong taste of the brown bread! However, that opened the door for a great discussion on how we act when we go to someone's house and are offered food that we don't care for. And, after that discussion, we broke out some ritz crackers and peanut butter. : )

We have had so many evening activities the last few weeks. I have been super thankful that I put the effort into a menu plan this month. I was pretty wishy-washy with what we ate in January ... just the leftover blahs of being tired from the holidays. I've done a much better job this month - lots more veggies on our plates and I've thrown in a few new recipes that have been winners. I haven't had any urge to get out and run of late (shame on me) so having a plan for what I want to eat is even more important or I just graze willy-nilly in the kitchen. Tonight I'm making lawnmower taco ... one of my girls' FAVORITE recipes. (I think someone even asked for it as their birthday meal last year). Super quick and easy.

I finished up two weeks of Project Life last week, and have another one waiting on me in the album. Just need to snatch a few moments to do my writing. Creating a notebook for the last six weeks of CC with all my tutor information (and any worksheets I want my kiddos to do for extra practice). I'm so glad that is something I've added to my prep time this year. It's a little work on the front end, but it was invaluable to be able to hand that off to my sub last week when we had to miss because of eye infections.

I don't ever want to forget... How excited this little boy is to be potty training. This is not something that I was planning on starting right now, but he was very interested so we jumped on board. He has done really pretty great and we are so proud of him. And, I'm glad that I didn't know that the last time that I bought a box of diapers was probably the last time that I would buy a box of diapers.

Being intentional. Thinking about how much time I spend checking off lists and staring at screens versus playing cards and airplanes and sitting and being still with one another. After all the reading that I got done in January, February has been slow going. That said, I finished Wildwood Imperium (book 3 in the Wildwood Chronicles) and started Shauna Neiquist's Bread and Wine. I have a feeling that the food memoir may be my new favorite kind of book to read. A book where it is like you are chatting with me over coffee AND your favorite recipes? Yes please! Up next will probably be The Little White Horse for the March Reading to Know bookclub (I'm hosting!) and finishing Pursue the Intentional Life by Jean Fleming. And maybe starting another C.S. Lewis book. Or one of the many, many others on my list that I want to get to. : ) The kids and I are reading These Happy Golden Years aloud right now ... it's been forever since I've revisited this one and I'm enjoying it immensely.

For decisions that we are making as a family. For a friend and her husband with some big medical needs.

With exercising! It has just been so cold that I can't get excited about heading out the door in the dark to go exercise before the kids get up. And, I have been managing my time very poorly of late so later-than-normal bedtimes have also had a big effect on the getting-up-and-out-the-door situation as well.

A movie playing behind me. (It's winter break after all). One of the girls is at the dentist with her dad right now and I'm thinking that when she gets home and we've had some lunch, we'll get outside for a bit. It's going to be in the mid-60s today after all!

Floors are crying out for attention, but I've been on a serious decluttering mission of late and in general, it's not too bad.

One of my favorite things...

Photos. Instagram. Savoring the days and stages of my kids in film. I haven't taken many pictures the last few days and while it's good for me to put the camera down every now and then, when I need a picture and end up scrolling through my files on the computer, I'm always amazed and thankful at the memories we have captured.

A few plans for the next week...

A well-check for a girl. A playdate later this week. A grown-up dinner out with friends.

A photo worth sharing... These two make me smile.