What's On My Plate, Listed

The other day a friend asked me what I have been eating over the last year with all the weight losing and running - what were top five things that I was eating now-a-days and to be honest I didn't have to think terribly hard. A quick scroll through the food pictures that I have taken have shown that I have some go-to meals, especially for breakfasts and lunches. I typically eat what the family does for dinner though I might substitute the starch, if there is one, for an extra vegetable.

Anyway, here are five seven things that you will routinely find on my plate.

:: Brussels sprouts. Pan roasted in a bit of bacon grease or Pam spray. (Depends on how wild I'm feeling). Tossed with salt, pepper, and a sprinkle of grated Parmesan cheese.

This photo I threw in a chicken sausage with the Brussels.

This one has an egg beater or two added. (Note: I'm not opposed to eggs at all and eat my share of those. However, someone in this house has had the occasional high cholesterol test and we keep egg beaters in the fridge. And, they cook super quick). :: Fish tacos. I buy fillets of tilapia at Aldi's and can pan fry them super quickly while I'm making lunch for the kids. I season them with whatever I find in the front of the spice cabinet - garlic salt, onion powder, Lawry's seasoning, taco seasoning, etc. Throw them in a corn tortilla with some peppers and onions and lunch is done.

Sometimes a little lettuce or shredded cabbage/coleslaw mix is added if I have any around. Maybe a drizzle of ranch dressing.

:: Sweet potato fries. Weekly. I dice my potatoes and flip them with a little Pam and season them heavily with salt, pepper and Lawry's. Roast them in the over on 425-ish for 20 minutes-ish. Watch them near the end - the ones above are a little more done than usual. : ) Cook time depends on how think you cut the potatoes and sometimes I'm lazy (or really hungry) and don't take the time to cut them small. I've also just diced them in cubes, cut up some peppers and onions and roasted all that together. Makes a great lunch for me to take on our tutoring days. (A chicken sausage is a nice addition to this as well).

:: Spaghetti squash. I lived on this stuff this winter. While I made breakfast in the morning, I would steam them in the microwave and then by lunch they would be cool enough to shred and eat. I season them the same way I season Brussels: salt, pepper, and a sprinkle of shredded parm. (Shredded Parmesan + anything = yum).

:: Last summer I survived on pan roasted asparagus. I would be super sad when my fridge would be empty of it! Same seasonings as everything else. 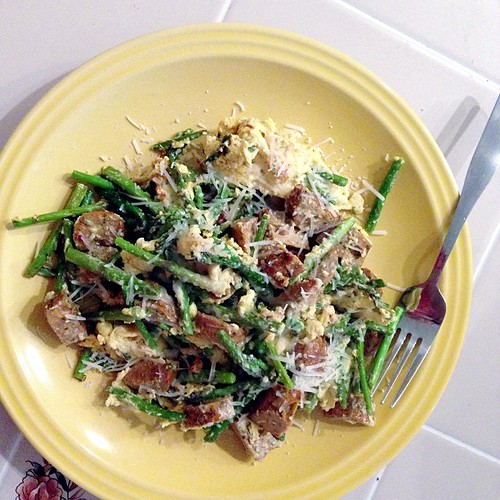 :: Chicken sausage should probably get it's own listing. I buy the big pack from Sam's and cook up a link with whatever veggie I have in the fridge. There are tons of different flavors and seasonings and it's just the right amount protein. (The one below was thrown in with a scrambled egg). I also make turkey kielbasa with a bit of regularity.

:: The banana pancake. Now that I think of it, I haven't had one of these in a while, but I ate these like crazy the first few months. With a smear of almond butter down the middle - so so good.

:: Bonus: favorite bread. Joseph's brand in flat bread and pitas. Just the right sizes if I want to make a sandwich (because sometimes the sandwich is just easier to tote places!) This post is part of a list-making project called Lists With Friends 2014, an effort to document the year in lists of all types. I love lists and am excited to be taking part of this fun project. : )
Email Post
Labels: Food Food summer JustMe