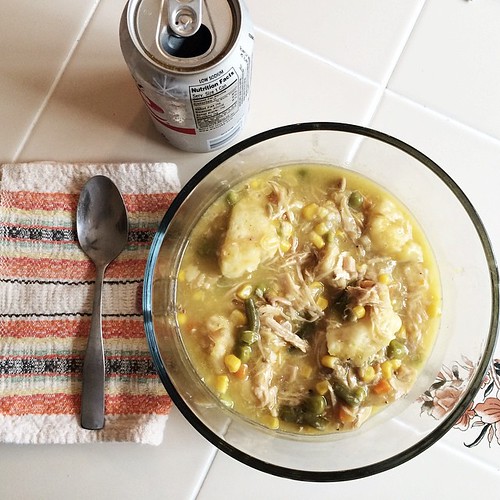 This week has been crazy. I have had appointment after appointment after appointment on the calendar and I'll be honest ... I'm tired. Thankfully I went into the week with a pretty decent meal plan and there were several crockpot recipes on the menu to make the evenings a little less hectic. This is the first of two new ones that I've tried this week and it was a keeper. I cooked a whole chicken in the crockpot on Monday and the leftovers were reinvented into chicken and dumplins on Tuesday. It's been years since I've had chicken and dumplins and I'm pretty sure that it's going to go into the rotation for the rest of the winter.


4 boneless skinless chicken breasts (I used leftover chicken, precooked, but you could dump frozen chicken breasts in as well)
2 Tablespoons of Butter
2 cans of Condensed Cream of Chicken Soup (I added a 3rd can near the end to thicken it b/c I added too much water)
1 Onion, finely diced
1 Package of refrigerated biscuit dough
Sea Salt and Ground Pepper to Taste
1 bag of frozen mixed vegetables (optional)
Water

Place the chicken in the slow cooker and top each breast with butter, then sprinkle sea salt and ground pepper on each breast. In a separate bowl, mix together well the cream of chicken soup and onion and frozen mixed vegetables (optional), then pour this mixture over top of the chicken, spreading to cover each. Next add just enough water to cover the chicken. Cover and cook for 4-5 hours on high or all day on low.

During the last hour of cooking: Take one can of the biscuits and cut each biscuit into 4 pieces and place in the mixture and stir well to distribute the biscuit pieces (these are the dumplings).

All six kids here ate this (for the most part) without complaint. I did have a couple that were not crazy about the dumplins, but they ate the chicken and veggies so I consider that a win.