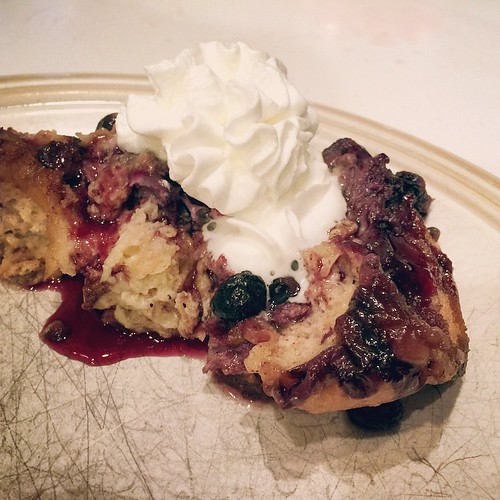 We tried this recipe out on Saturday night and it's a keeper. Not one of my better attempts as a faux food blogger because it was (a) winter/dinnertime lighting and (b) not much in the way of leftovers so I could take a better picture in the daylight. We are big fans of breakfast-for-dinner and I seem to go in spurts of keeping it in the rotation and then forgetting about it for a while - probably because I feed the kids waffles for breakfast fairly regularly. However, Travis doesn't get them as often so whenever I pull a full-on breakfast for dinner, I get rave reviews from him.

Anyway, you can view the recipe here - I made it as is with no changes (unless you count leaving out the vanilla because I forgot about it). I even used leftover french bread that we didn't eat with dinner and just threw it in all haphazard. You definitely don't want to cook it longer than the suggested 3-4 hours. We pulled it out at 3 1/2 hours and it was starting to get crispy on the bottom (but I liked the crispy sweet pieces of bread. Yum yum.)

PS. This post from Flower Patch Farmgirl on surviving motherhood by way of food spoke to me. Worth a read.
Email Post
Labels: Family Food Menu Plan Monday