Babita Guman was the type who "doesn't back down," said her husband, Deodat Guman. When a fellow shopper at a market once told her to go back to her country, Mrs. Guman, 33, threw the question back at her. "Why don't you go back to your country?" she asked.

A native of Guyana who moved to the United States as a teenager, Mrs. Guman was a smart, aggressive and flag-waving American who also took charge at home in the Bronx, said her husband and father of her two daughters, ages 6 and 7. "Most guys would say they're the men of the house, but my wife did everything," said Mr. Guman, a bus driver for New York City Transit. "She cooked, she cleaned, she paid the bills. I just went to work and came back."

Mrs. Guman was a computer specialist at Fiduciary Trust Company International on the 97th floor of 2 World Trade Center, but she was about to take a test to become a schoolteacher, Mr. Guman said. Two weeks before the attacks, Mr. Guman took his wife and the girls fishing for the first time. Mrs. Guman, of course, caught a fish. It took Mr. Guman a little longer to catch his, but as he noted to his daughters, "I ended up catching the big one."

Profile published in THE NEW YORK TIMES on October 13, 2001.

Living in Tennessee and wife to one outstanding man and mama to 4 amazing munchkins. Striving to follow God in the unseen daily simple tasks in a world that wants everything to be big and in the spotlight. 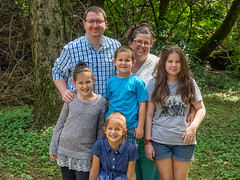 What We've Been Reading