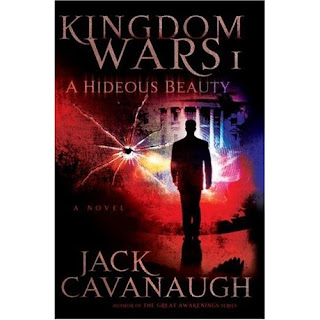 Award-winning Jack Cavanaugh engages readers in his latest release, A Hideous Beauty, a riveting supernatural thriller that is first in The Kingdom Wars series. This project is the ultimate fusion of suspense, politics, and the supernatural.

Imagine America’s borders have been breached—but not by something you can see. Homeland Security doesn’t even acknowledge this terrorist group exists. Yet hundreds, possibly thousands of spies are crossing our borders every day.

They are renegade angels, agents of destruction from a supernatural realm. They move among us virtually undetected. For millennia they have acted as sleeper agents, influencing human history. All the wars in the world pale in comparison to the havoc they can wreak. And now, one man is about to be sucked in to the battle.
Pulitzer Prize winner Grant Austin returns to his old high school to flaunt his accomplishments in the face of his childhood nemesis, Miles Shepherd. But he discovers a conspiracy of cosmic proportions involving a plot to assassinate the president and implicate Grant as a conspirator.
In an effort to unmask the assailants and salvage his own reputation, Grant enlists the aid of a wheelchair-bound professor of theology, a high-powered Washington insider, and an investigative reporter who just happens to be his old flame.

As Grant peels away the layers of conspiracy, the truth takes on a hideous beauty— for nothing is what it seems to be. Not even Grant Austin.
About the Author:
Jack Cavanaugh is an award-winning author of twenty-three novels, including the eight-novel series The AmericanFamily Portrait. Nearly half a million copies of his novels are in print and have been translated into six languages. He is the recipient of the coveted Christy Award and Silver Medallion. Cavanaugh also teemed with the late Bill Bright to produce a four volume historical fiction series set during times of revival in America. (Proof, Fire, Storm, and Fury).
Q. How did you get the inspiration to mix genres like you did in this book: suspense, political fiction, and the supernatural? How do you even classify the book when describing it to others?
A. Kingdom Wars is supernatural suspense, the everyday world colliding with the inhabitants of heaven. In A Hideous Beauty, the point of collision is the political arena when a plot to assassinate the president is uncovered. In the second book, Tartarus, the conflict erupts after a newly discovered ancient manuscript leads archeologists to long-lost New Testament treasures.
Q. Where did you birth the idea for this book? When? How did it come about?
A. As a student of the Bible I have developed a fascination with the way it describes the supernatural and natural worlds overlapping. It assumes the overlapping is obvious to everyone. The book of Hebrews tells us that we might at times find ourselves entertaining angels and not be aware of it. But it never says whether the angels we encounter will be friendly. After all, Lucifer is an angel. That’s all it took to get my imagination jump-started. I dove into the Bible looking for instances of encounters with the supernatural and developed my stories from there.
Q. What sort of research was necessary for writing Kingdom Wars?
A. Extensive. I have used the same approach writing these contemporary novels that I used while writing historical fiction. Instead of tracking down historical documents, I have researched the Bible (translating from the original languages), read numerous theological books on angels and the supernatural, and read popular and literary works, such as Milton’s, Paradise Lost and Dante’s Divine Comedy. I want to introduce the modern reader to the supernatural through stories just as these men did for their readers in their day.
Q. Which one of your characters is most like you, and why do you say that?
A. Grant Austin. His personality is more me than any other character I have written. I even went so far as to set the story largely in El Cajon and San Diego where I grew up using places I frequented, such as the high school, though I changed the name.

Q. What takeaway points do you hope the reader pulls from this book?

A. Angels are real. They are here. They are active. And some of them are not friendly. In the front of each of the novels I included quotations from other Christian scholars like C. S. Lewis and Francis Schaeffer, who have said essentially the same thing I’m saying, only I’m saying it in the form of a story.

Q. What other books are in the series, and when will they release?

A. At present, there will be a second Kingdom Wars book. The working title is Tartarus and it is scheduled for release Spring 2008. The concept for this book is the advantage rebel angels have over humans in terms of life span. Their lives span millennia. We have less than a century to learn about them, adapt our way of thinking to their presence, and engage them in battle. They can use this disparity to give them a tactical advantage. Think of it as time-released terrorism. The story begins when a fraudulent First Century manuscript is unearthed two thousand years after it was created.
Q. For the writers out there, what’s your favorite writer’s block trick?
A. You’re not going to like my answer to this question. I don’t believe in writer’s block. Writing is hard work. When the going gets tough, by calling it writers block we make ourselves victims and waste time searching for a cure to make writing easy. Serious writers show up every day. They rejoice in the serendipitous times and put their heads down and work through the tough times. Their passion drives them.
Q. Writers say they either neglect something or someone, or rely on caffeine or cravings during hectic deadlines. What do you catch yourself doing when you are down to the wire with your works-in-progress?
A. I do my best to keep my perspective. No book is worth sacrificing my relationship to God, my wife, or family. I work hard, usually ten to twelve hours a day, six days a week. Neither will I sacrifice quality for a deadline. Years from now, no one will remember whether or not you made the deadline, but everyone will know if you wrote an inferior book. That’s not to say that deadlines are irrelevant. Missing a deadline puts pressure on a lot of good people. Publishing is a partnership. I do my best to fulfill my contracts and write to the best of my ability, and I hope my publisher will contribute to the best of their ability.
Q. Can you share something with our readers about what God has been teaching you lately?
A. Not surprisingly as I search the Bible for supernatural encounters, the lessons I have been learning are in the area of living a spiritual life. The book of Ephesians has been particularly helpful. I have been learning that intangibles such as courage, confidence, truth, humility, and patience are not simply characteristics of a spiritual person, they are that person’s offensive and defensive weapons. When the adversary attacks with doubt, lies, and intimidation, we fight back by choosing to live confidently, by choosing to tell the truth, and by choosing to take a courageous stand.

Q. What else would you like your readers to know about you, or about Hideous Beauty?
A. Grant Austin’s use of humor in the face of adversity is a Cavanaugh family trait. We laugh a lot. Our family gatherings are marked by levity and laughter. We laugh during difficult times. Sometimes we laugh at the wrong times. (I once laughed myself out of $800 during a negotiation for a speaking engagement.) I have standing instructions for kazoos to be passed out at my funeral. My family will know what to do with them. I want them to laugh in the face of death and not to mourn as those who have no hope.
I'm looking forward to reading this book - I've read Mr. Cavenaugh's American Family Portraits series and they were excellent!
Email Post
Labels: Books