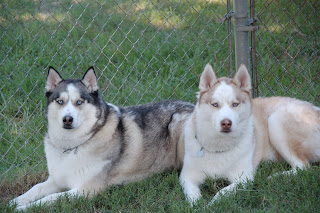 I posted a couple weeks ago about our family's decision that it was time to get rid of our dogs. Please understand, it isn't because we don't love our dogs - we do! This decision was a long time coming, but the time was right - we have five people living in a little two bedroom house, along with two 90 lb. dogs. I was spending almost an hour a day vacuuming this summer (during their heavy shedding season) and we were fighting a losing space issue in our big family room as to who got to lay play on which section of the floor - the 90 lb. dog or my 20-ish lb. girls. There were several other factors as well, but the bottomline was that it was time to find them a new home.


With many tears, I called around ... how do I put an ad in the paper, what is Animal Control's policy, do any friends want dogs, etc. In the end, we put an ad in the paper saying we had two dogs free to a good home and waiting to see what would happen. You would NOT believe the number of calls we got - tons! That was so encouraging to me, even though every phone call was a little sad ... there were lots of folks out there that were interested in giving our buddies a good home.

Jenny (our girl, the black and gray one) ended up leaving us the first day the ad was in the paper. She went to a young high school girl who had always! wanted! a! husky! The excitement the girl had was so sweet for her new pet and I felt pretty good about giving Jenny to her, although in the end, I had to go cry hide in our bedroom while Travis did the dirty deed of handing the dog over to the girl. These were MY dogs that I had raised, fed, trained, and while it was a good decision, it was not easy to watch them leave.

Our other dog, Sam, ending up leaving on Thursday to another young girl - this time a sweet single gal who had just bought her first house and wanted a big dog for company. I really liked this girl. She seemed like a great match for our big bear of a boy dog and we even gave her the rest of our dog food and sold her their cage. This was harder than letting our Jenny-dog go ... both Noelle and I were pretty teary when Sam drove off.

Now, this part of the story is the whole reason for this post. I tend not to post about too many frustrations because, well, I just don't. Not that I don't have them, but it's a gray area with me about venting on the blog. However, I need some female commisseration. : )

We were dog-less for a week and a half when I got a call Monday morning that our dog Sam had been found in an area of town about 20 miles from us and could we come get him. He was apparently still wearing his rabies tag (thank you Lord!) and they were able to track us down with the number. I explained that he wasn't really our dog anymore, but if I couldn't get ahold of the new owner on my phone, I would come get him. I called the "sweet" girl that took him, left her a voicemail on her cell phone, and proceeded to load up the girls for the 20 minute car ride to pick up Sam. After getting our tired and somewhat smelly dog, I called the girl again and told her that I had him and was taking him back to our house - could she please call us and arrange to come get him. No return phone call.

Now, this is the part that has irritated me to no end. She never once called us. I left several messages for her that we had him (note that we no longer had any food for him or his cage anymore) and she apparently decided that when he got away, that she wasn't going to worry about finding him. And, y'all. She lived a loooooooong way from where he was found. We're talking probably a good fifty miles from her home to where he was picked up. This was not an instance of him getting out on Monday morning and getting picked up a few hours later. He had obviously been loose for several days and there had been no call in by her to animal control saying her new pet was missing. (I know, I checked to see if there was another way to contact her).

Finally, Travis was able to get her on the phone last night and when he asked her if she was the one that we gave our dog to she denied it all and played dumb on the phone. For me, it doesn't upset me that she apparently changed her mind about having our Sam-dog - it's that she lied to us about it and that she was obviously not worried that he would get hit by a car or injured some other way. That is just not cool on so many levels.

Anyway, we've had Sammy back home for two days now and all he has done is sleep for the most part. The girls are so glad to see him. Natalie (19 mo.) has been hugging her doggy over and over again and Noelle (4) was thrilled when we saw Sam and loaded him in our van. (She immediately said, "Now let's go get Jenny!" I think she thought, now that Sam was back, we could pick Jenny up from her extended sleep-over as well.) Now we need to figure out what to do. Do we just keep Sam here? I can't bear for him to go through something like this again. Travis has called one other person that had been interested in Sam and we're waiting to hear back from him, but I'm torn. He's back home. He's safe. He's with a family that loves him. I'm not denying that it was so much easier on me without the dogs, but even dogs shouldn't be treated like that. What to do...

Okay, if you stuck with me that long, thanks for letting me get this off my chest. : ) We could use some wisdom in this small matter so if you think of us, say a prayer please? (And hug your dog today if you have one).
Email Post
Labels: Family JustMe