This book would make a great adventure/Indiana Jones-type read for the guy in your life! (Just a little reminder that Father's Day is coming up!) The search for the bones of Elisha, thought to have the power to bring the dead back to life, leads Professor Jack Hawthorne on quite a ride, and unburies some things he had thought were left to his past. This book was clever, clean, and full of twists and turns ... another great one to take to the beach or on your summer vacation. I thoroughly enjoyed reading this one. :) 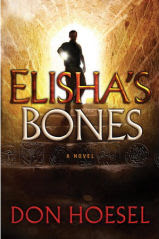 Every year, professor of antiquities Jack Hawthorne looks forward to the winter break as a time to hide away from his responsibilities. Even if just for a week or two. But this year, his plans are derailed when he's offered almost a blank check from a man chasing a rumor.

Bankrolled by a dying man of unlimited means, Hawthorne's hunt spans the globe and leads him into a deadly conspiracy older than the church itself. A born skeptic, Jack doesn't think much of the assignment but he could use the money, so he takes the first step on a chase for the legendary bones that will take him to the very ends of the earth.

But he's not alone. Joined with a fiery colleague, Esperanza Habilla, they soon discover clues to a shadowy organization whose long-held secrets have been protected . . . at all costs. And he soon discovers those sworn to keep the secret of the bones will do anything to protect them. As their lives are threatened again and again, the real race is to uncover the truth before those chasing them hunt them down.

If you would like to read the first chapter of Elisha's Bones, go HERE
Email Post
Labels: Books Review